Editor’s Note:  I’ve spent the last few months pondering how and when I’d reintroduce DRIVEN after our summer hiatus.  I wanted to start “phase two”, if you will, with someone who will truly knock your socks off, and I am certain MJ Marggraff is your girl.  Her “before” is not unusual.  Her “after” is.  MJ was a woman feeling stifled and uninspired in her daily routine.  A chance occurrence opened a fork in the road, and allowed her to leap into pursuing a lifelong dream.  As she puts it, “When you’re in your element, and doing something that you love, amazing things start to happen.” I don’t want to spoil her story, because it’s a good one, and I’m hopeful that after reading you feel encouraged that there is no time-limit on finding your own element, and living the life of your dreams. 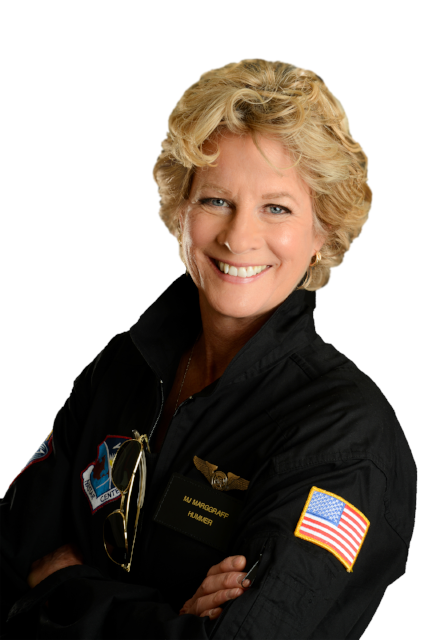 Completion of Sub-Orbital flight training in the NASTAR simulator, 2013.

I’m just going to come right out and say it: MJ Margaraff’s mind is in on a different planet, literally. The 45-year-old mom of two took one of the most dramatic left-turns in any career I have ever heard of, transforming from a stay-at-home mom to pilot, whose goal is to make it to space in the next few years.

“Before I began pursuing my career, life was very routine. It was carpool, PTA meetings, and after school sports. Don’t get me wrong, I love my children, but it was becoming rote. There were challenges for sure, but the challenges weren’t resonating with me”.

One morning, when her children were eight and ten years old, MJ misplaced her daily planner that she used to map out her family’s activities.

“My planner was the book that told me what I am and what I am supposed to do. After I dropped the kids off at school, I thumbed through the pages and they were blank. I looked at it and went ‘ wow- there’s nothing here. Instead of just plain refilling it, what if I REWROTE the entire thing?”

MJ decided that she wanted to pursue a childhood dream of becoming a pilot, which she says wasn’t an easy decision to make. She had always romanticized the idea of becoming a pilot but wasn’t fully convinced that it was something she was ready to throw herself into.

“Flying and learning to fly is a very daunting process, and I read A LOT about what would go into it. I actually checked out flight school a couple of times and didn’t have the courage to sign up.” 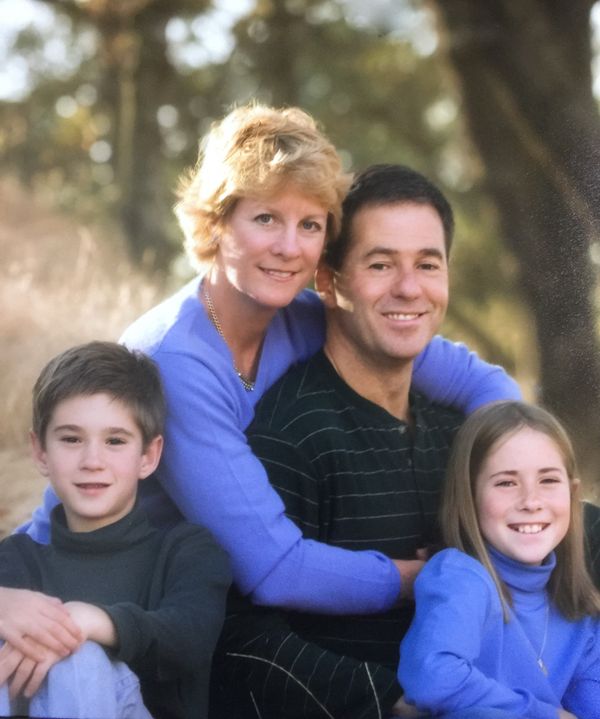 Marggraff Family: “The year I became a student pilot – 2003”

When she finally did, she quickly realized her counterparts were significantly younger, and mostly male.

“There I was, 48 at the time, and the other students were half my age and all guys. I walked in and felt like I had crashed a fraternity party and I was the house mother! {laughs} I sat down among them and they looked over at me like ‘who are you!’ I realized very early on that when going after my dream, I was not going to feel comfortable, and that was just something I was going to have to deal with.”

It didn’t take long for MJ to fit right into flight school, to the point where her younger counterparts would copy her homework every morning before class! She completed the first two years swiftly and with amazing success, both in the classroom and in the air.

“I remember during my first take-off asking my instructor ‘is this the only time I’m going to feel this way?’ And he said ‘I feel this way during every, single one of my take-offs’…and I thought to myself ‘boy, this is really life-changing!’”

After many months of hard work, MJ found herself qualified and experienced enough to train to become a flight instructor herself.

“When you’re in your element, and doing something that you love, amazing things start to happen.” 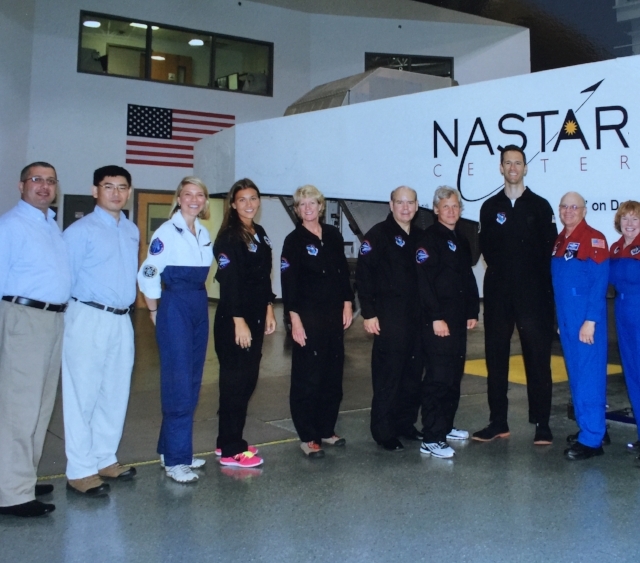 The NASTAR training simulator, the instructors, and the future sub-orbital astronauts. MJ is fifth from the left (2013)

A few years later, MJ received an invitation to work alongside a few companies and individuals in the commercial space industry.

Her first project has been as a Mission Support Rep with Virgin Galactic, which if you’re not familiar is the company planning to offer ordinary tourists a ride into space.

She is also launching a project with a company called Made In Space, which makes a zero gravity 3D printer that currently lives on the International Space Station (ISS). Along with Made In Space, MJ created GravityGames™ a new STEM (science, technology, engineering and math) innovation where students design a game astronauts on the ISS can make on the 3D printer and play in space. The first GravityGames experiment is on the ISS and will be manufactured this year. Afterward, GravityGames may be a STEM space project for students nation-wide.

“It’s extremely exciting to inspire the next generation about space. I run outside at night to look up at the ISS when it’s overhead. I wave to the crew blitzing by at 243 miles up and think ‘they’ve got GravityGames up there!'” 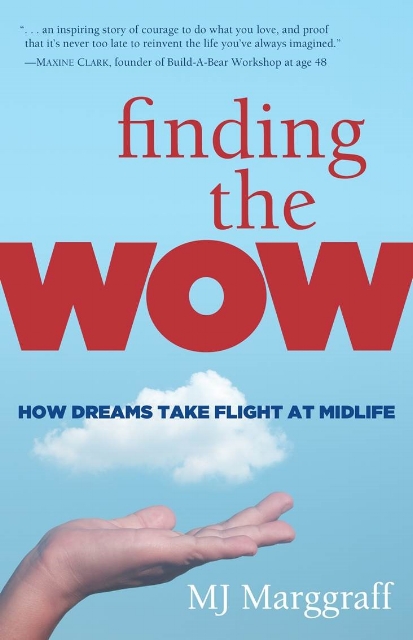 Amazon #1 New Release; May 2003, BT Publishing, Boston. / “I wrote ‘Finding the Wow’, hoping it will inspire others to do what they love.”

One of MJ’s personal goals is to make it to the suborbital edge of space in the next few years.

And as if that’s not enough, MJ recently published her first book, Finding the Wow: How Dreams Take Flight at Midlife, which inspires women to turn off the “autopilot” and pursue the life of their dreams on earth…and beyond. 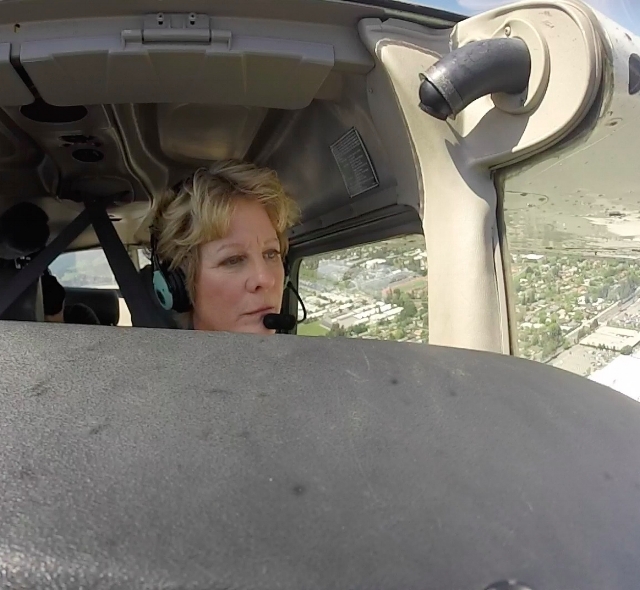 Where did your courage come from to take the leap from stay-at-home mom to pilot?

“I had wanted to fly since I was six years old, but I come from generation of terrified air travelers. My mom and dad thought taking a trip by air was putting your life on the line: understandable since my father’s airplane crashed in WWII. Courage? I finally answered an inner calling. That was the risk. But the other voice of guilt inside said, ‘Really? Maybe for a younger you! What kind of Mom goes to flight school?’ I felt like I should have my feet on the ground when my children were in school. Just in case they called, I could come running.

I had to change my attitude and stereotype of myself: from midlife Moms don’t do this kind of thing, to taking steps to see if I could learn something new, something hard, but see if it was something as special and meaningful as I had imagined.”

What did your family think about your this decision?

“You want to learn to fry?” asked my son, happy to hear that maybe I had finally decided to do something about my lack of cooking skills. Our children had to hear some small talk about how their mother must be crazy. My husband was all for it, as long as it wasn’t helicopters—machines were too risky.

Then they knew I was serious. I studied for hours each night, even practicing with a small toy airplane and say my maneuvers aloud. I’d drop off my children at school, timing my classes so that I would land and be on time to pick them up from school again. ‘I think I saw you flying up there when I was at recess!’ exclaimed Annie, many times. It wasn’t me, but she was happy. Something about flight resonated with her too; she took lessons years later.”

Did you make any mistakes during your journey?

“Any? Many! All student pilots do. But I wrote mine down: the hilarious and absurd challenges, like when all my notes blew away when I opened the air vents and I was on my first solo flight, to the knee-shaking scary stuff that I didn’t tell my family about until years later. I got myself into messes. I got myself out of them, mostly due to spending so much time to learn all I could. I talk about my mistakes in my book, because I hope that telling about them will relieve others from thinking that the only way to do anything is to be perfect at it. I became a good pilot. Not perfect. But good and loving it.”

In our conversation, you mentioned that you had to manage your fear. What were you frightened of?

“I called fear ‘the dragon.’ But dragons represent opposite outcomes. Most of the time, fear is thinking that the outcome will be negative. Rethinking how to fight fear was as important as any of my flight lessons. Because if I didn’t, I’d stay in the same old routine, wondering if I ever could have reached a dream, and that I’d have to live with that. What I was afraid of initially, like learning to stall the airplane in flight and feel it falling, was because I didn’t understand it. When I did, it was still scary, but far less so. Fear is my ally too; because it makes me learn, I get a little wiser each time. The dragon is what made me continue to learn, all the way through more than the first license to fly, but all the tests to become a flight instructor too. I love to fly. I love to know all about it.”

Your book is focused on helping women ‘live their best life.’ If you were to offer one piece of advice to women feeling stifled, what would it be?

“Don’t let fear rule your life! Take the chance to do what you always imagined doing, doing what you love. Take one small step in the direction of your dream and you’re on your way! Tomorrow, take another…”

What are your plans for space travel?!

“The other childhood dream I had was to become an astronaut. So getting to the edge of space, the sub-orbital edge of about 65 miles up, will be thrilling! At that altitude, you are an astronaut. I will be a passenger on that flight, seeing Earth wrapped in its blue scarf and stars in the blackness of space. You could train to prepare for the flight too! Flights start in about two more years!”

You’ve accomplished so much! What’s next for you?

“The new experiment. GravityGames, is on the International Space Station at this writing, scheduled for astronauts to conduct this year. I am thrilled to be the creator and leader of a student team who came up with the design and hypothesis. To contribute more to space flight, I began graduate work at USC this fall to address the problem of ICE conditions (isolated, confined, and extreme) on astronauts on long-duration space flights.”

“’You’ve got to break eggs to make omelets,’” my Aunt Jo used to tell me.

More recently, a favorite yoga instructor told me that there are two important days in our lives. The first is the day you were born. The other is the day you find out why. I found meaning and purpose the day I lost my planner, got a new one, and filled it with a simple goal: start a propeller. I didn’t have a plan of much more than one license, and worked tirelessly to get it. But that was the path I was on, what learning to fly was really about—finding my way, at last, to the stars.”